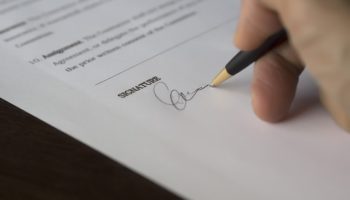 When Is a Letter of Intent Legally Binding?

Letters of intent may be legally binding depending on how the letter is drafted, the jurisdiction, and the context in which it is used. Typically, letters of intent are non-binding in business-to-business transactions containing a provision stating that the letter isn’t binding. While a court might rule that a letter without this language is simply an expression of intent, parties should use strong non-binding language.

Courts’ Interpretation of Letters of Intent

Courts rely on two factors to determine if letters of intent are legally binding. These include written expressions of intent included in the letter and the actions of both parties after the letter is signed. If the parties treat the letter like a contract, the court may rule it binding.

The ruling will also depend on the parties’ relationship. For instance, if two parties both draft and sign a letter of intent that’s ambiguous with a history of making non-binding agreements, the court will likely rule the recent agreement as non-binding.

Protocol and business etiquette are also used to determine whether or not a letter of intent is binding. Many mergers and acquisitions will start with term sheets, which also serve as letters of intent. Term sheets are non-binding in most cases, which could influence the court’s decision.

Even if a letter of intent doesn’t include language that legally binds it, a court may find it to be binding if there is enough information contained in it for it to be considered a contract. As another example, a case could involve the sale of commercial property, during which the buyer and seller sign a letter of intent containing detailed descriptions of the specific property, sales price, title and deposit requirements, and the particular time and place of the deal. If sellers change their mind and sell the property to another party before signing, the letter could still be binding.

In some cases, a letter of intent may be non-binding, but a deal doesn’t take place despite a company’s dedicated resources and expenses. While no recourse for these losses occurs in many of these cases, it’s possible that the breaching party could have failed to practice good faith.

Ultimately, the laws regarding letters of intent are generally ambiguous and will rely on the specific type of letter and the jurisdiction in which it’s drafted and signed.